In this article, I'll go over the pros and cons of a single x86_64 server vs an ARM Cluster, as well as show you how you can set up your own ARM Cluster with Docker Swarm, GlusterFS, Traefik, and Ansible. I focused on achieving a balance between ease of setup, ease of use, and computing power. If you have any ideas about how to make things even easier, email me.

If you listen to the advice of certain selfhosting communities, the best way to go about hosting your services is to head over to eBay and buy a used Poweredge R710. If you don't particularly care about your environmental impact (you should though), and are ok with the downfalls listed below, this is absolutely true. You can pick up a 12 Core @ 2.8GHz, 72 GB RAM, 2TB HDD server for about $200 (USD) after shipping.

With a modular ARM cluster (like what we'll be building in this article), you would have a zero to low-noise, low energy consumption, low power, fully modular cluster that is up to most tasks that the x64 server could do. If I need more computing power or storage space, I can just plug in more hardware and everything will be automatically rebalanced as necessary.

For me, the benefits for ARM outweigh both the benefits of x64 and the cons of ARM, making it the obvious choice. Here are a few things you may want to consider when choosing one...

* I found that it costs almost an order of magnitude more in electricity (to the tune of hundreds of $$$ per year) to run a traditional x64 server.

There's also, of course, the option of combining x64 servers and ARM servers in your cluster. Things that need a lot of power (video encoding, streaming PC games, etc) might need an x64 server. Nothing prevents you from combining the two in Docker. The x64 server which can go to sleep while not in use and then wake on LAN when required.

Okay, lets get into building an ARM cluster.

(I'm not going to link to vendors, but a full parts list is at the end of this section.) 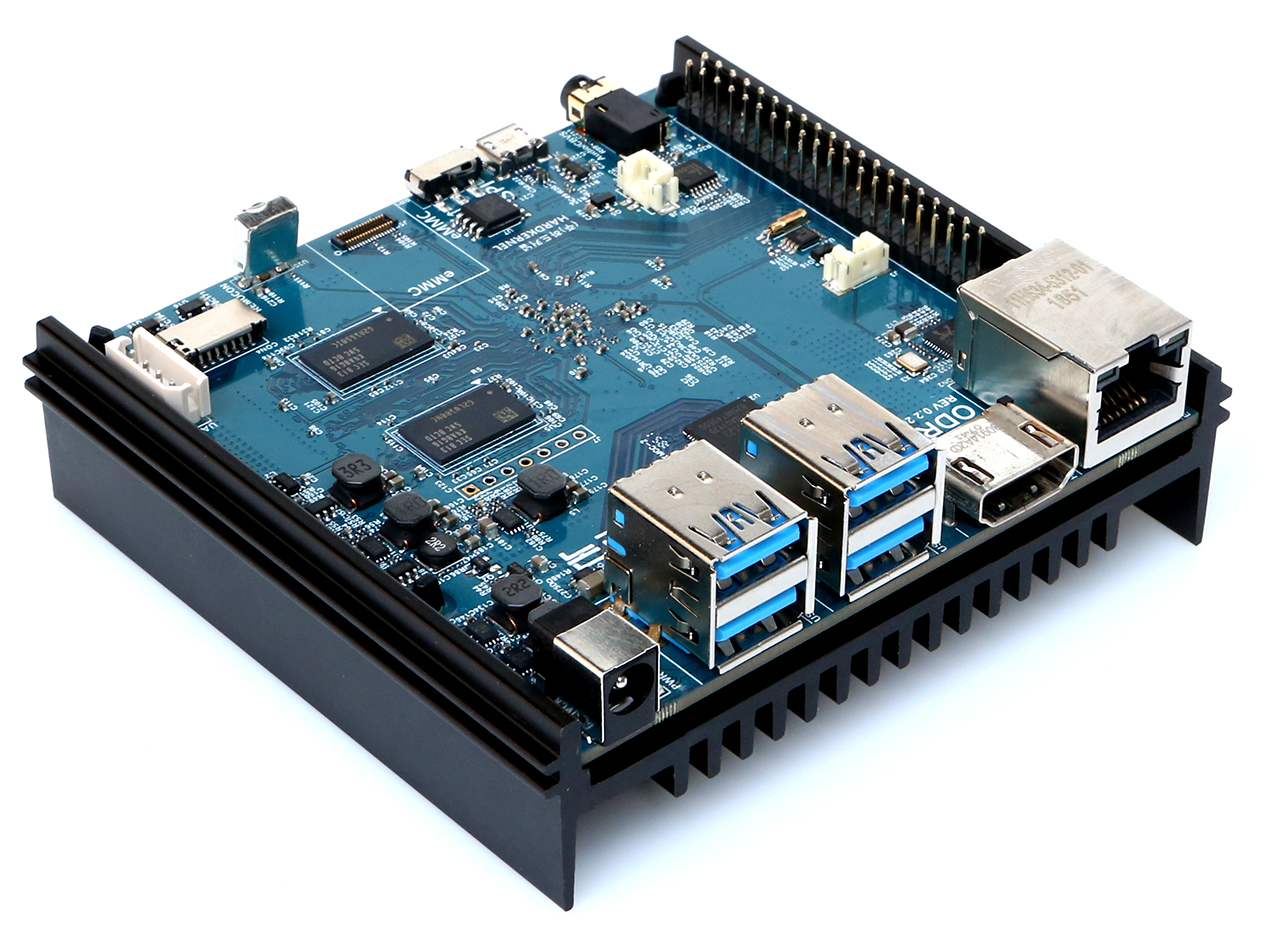 I went with the Odroid N2 as the main compute board for my cluster. This is the fastest/newest SBC that Odroid makes, and they don't have any moving parts (complete silence). Of course, they're in high demand right now (relative to supply at least), so it might be easier to get your hands on a different SBC. It also might be cheaper, since the XU4 for example is about half as fast but also less than half the price.

The neat thing about clusters is that they are completely modular. If you need storage in your cluster, you can add in an SBC that deals with storage. For example, if I needed more storage space I would get an Odroid HC2 and drop a hard drive in it.

You can mix and match as many decently fast SBCs to get exactly the right set of features you need. A word of warning though: stay away from the Raspberry Pi! The Pi 3 is sort of fast, but you can do much better for $35. The Pi is an excellent project that made SBCs mainstream (my first one was a Pi 1) and it's definitely worth supporting, but if you try to run more than one thing on one, you're not going to have a good time.

Some people opt to buy a single 12V power supply to power their entire cluster. I didn't want to work with wires so I just bought the cheapest UL-Listed 12V@4A power supplies I could find. One for each board.

Any gigabit switch should be fine. I found one lying around and repurposed it. Any cables that are Cat 5e or better should also be fine.

A lot of people don't like docker because "why run VMs for everything when you can just run things bare metal?" If you're willing to configure multiple copies of a bunch of software and have to maintain updates yourself, then sure.

That makes it harder to setup and maintain though. Docker means we can use existing images and configuration, and if they don't work then we can just find a different one to use (or write our own very easily). Sometimes projects will even have official docker images! This may not be the "purest" way of setting up a server, but it is by far the easiest.

Issues with this method include...

Docker Swarm will automatically pick which server to run a service on. Unfortunately, it doesn't sync persistent data across servers (which means your services won't actually work). With GlusterFS, any server can access the data on the gluster mount.

It has a few different modes, but the one I use is duplication (every board keeps a copy of all the data). If I had more than two boards I would keep duplication at 2x, so I get the benefit of redundancy while also getting more storage space.

Portainer allows you to manage your Docker Swarm through a web interface and makes pretty visualizations. You could do without this but deploying new apps (and more importantly, checking system state) from a GUI is significantly easier (and it's cool).

Traefik does three things for us.

You could use HAProxy or Nginx, but Traefik looked like the easiest to setup.

Most SBCs come with Ubuntu and a preconfigured user. To avoid getting confused as to which board is which, you'll need to do a bit of one-at-a-time setup. If you have a bunch of different networks (for whatever reason) or a smart plan to identify boards, do this in parallel.

After SSHing in with the default login and switching to root...

(Disclaimer: Make sure you know what you're doing. I'm obviously not responsible for what you do based on this guide. Try not to break things.)

Odroid boards have weird locale errors when you login. If you see one and live in the US (en_US) then you can fix it by...

I followed this handy guide to setup GlusterFS. The following is a summary. The .local domain names are setup automatically by Avahi. If they don't work for you, you might want to setup an overlay network so that the nodes have nice names.

Make a directory with these files in it...

Test to see if it worked with ansible -i inventory.ini all -m ping.

Be 100% sure to edit those values! This configuration WILL wipe mmcblk1 and lead to permanent data loss! Be very certain you've read through it and understand what it does before running it.

You can run these commands on any of your nodes.

Neat. You have Portainer running! Try poking around a bit and explore the menus. Once you get bored of that, it's time to install Traefik.

First we should create a network so that all our services can talk to each other. You can do this in the Portainer GUI. Make a new network called web with the driver set to overlay. The defaults are fine for everything else.

This is traefik.toml. If you're not using Cloudflare, head over to the Traefik documentation and adapt accordingly. This config will get certificates for *.example.com and example.com.

To deploy Traefik, just go to Portainer, select your cluster, click stacks, and paste this in:

Neat! You should be able to access the Traefik UI on port 8080.

I wanted to have a decent level of redundancy for this project, but ended up putting it off. I'm not storing anything that I'm not willing to lose yet - but when I do I'll put up another blog post and edit this one with a link.

A pointer if you want to do this on your own: this docker image looks like the best backup solution to me.

Neat, now that we have all the groundwork, how do we actually deploy useful services on this thing?

I think Miniflux is the best self-hosted feed reader. It supports the fever API so you can use it with a lot of RSS clients, and it has a nice web UI. Miniflux has an official docker-compose.yml file, so we just do a little prep work...

... and then head over to Portainer to deploy a slightly modified config (just like we deployed Traefik) ...

Notice how we set deploy: labels: on the service that we want to expose. In this example, traefik will proxy all traffic that goes to https://feeds.example.com/ to a miniflux container running on port 8080. If Miniflux supports multiple servers to one database (I don't think it does; untested), you can even click the scale button in portainer and have it automatically load balance things.

You might notice that Miniflux throws an error when you start it. Turns out you need to instantiate the database manually in the default Docker image. Just get a /bin/sh shell into the running miniflux image and do a quick...

... to set things up before first use.

Congrats! Your feed reader should be up and running! Now just repeat the process for everything else you want to deploy (there's a whole bunch of cool stuff here).